What is decoy effect in marketing psychology? 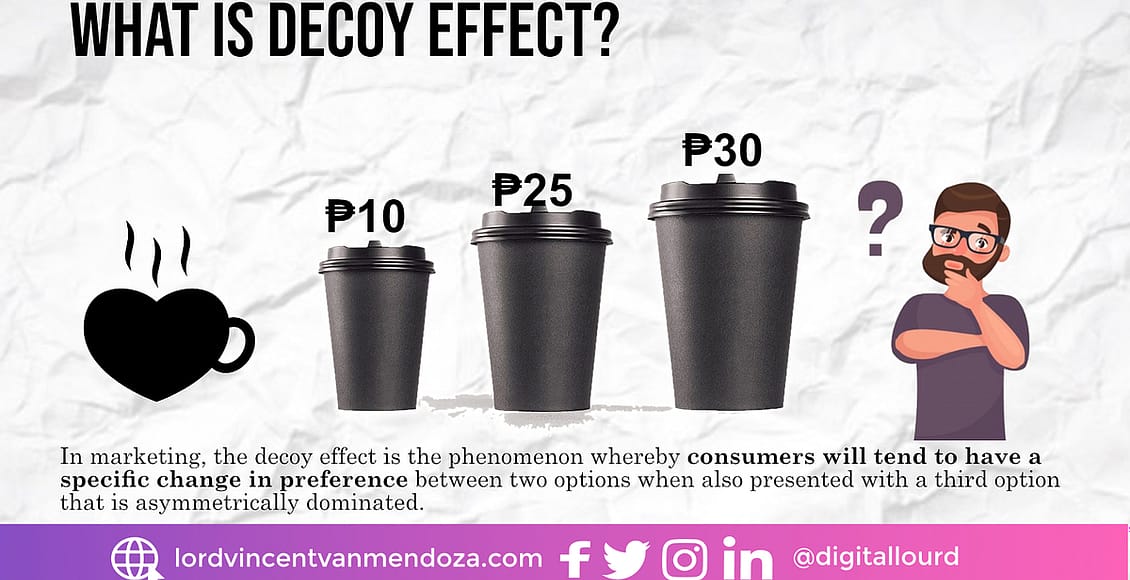 The decoy effect in marketing can be defined as a phenomenon whereby consumer choices between any two products are influenced when a third product, the ‘decoy’ is introduced. This third product is ‘asymmetrically dominated’ option to influence a consumer’s choice. This decoy is priced in a way that it completely rejects one of the options under consideration, and makes your choice much clearer for the other option (Samradni, 2020).

This is a question worth asking: Do we really decide for ourselves when we buy something?

In Dan Airley’s famous TED talk, “Are we in control of our own decisions?”, he describes an ad from The Economist outlining their latest subscription packages. Here’s what they offered:

It’s so crazy, ain’t it? You could get the print only subscription and the online and print subscription for the same price. Why would they even offer that? That’s what Airley thought also. He reached out to the folks at The Economist, but he never got a straight answer from them.

To answer this for himself, he decided to run his own study with 100 MIT students. He gave them the pricing packages outlined above and asked which one they would want to buy. When all three options were there, students chose the combo subscription as it was the best deal, right? But when he removed the “useless” option (the print subscription for $125), the students preferred the cheapest option.  It turns out that middle option wasn’t that useless after all. It actually gave students a frame of reference for how “good” the combo deal was and enticed them to pay more for that deal.

Let’s take a look at this illustrative example:

That’s so familiar, ain’t it? This must have reminded you of Starbucks.

This is how decoy effect operates. It describes how price comparisons between products affect choice. When there are only two options, and they’re priced “fairly,” people make decisions according to personal preference.

But, if there’s a third choice that’s overpriced compared to the first two options, it changes how people consider all options. The third option is a “decoy” choice. The decoy’s purpose is to change perceptions of the other options, not to sell necessarily.

In the case of Starbucks, its classic three-tiered sizing structure is a dead giveaway. Starbucks employs this pricing strategy so that customers choose the size that provides the most profit to the company.

In some sense, we could say that our buying decisions are irrational.  Decoy effect can be a good strategy when used well in your marketing effort.

What does the PICASSO Framework mean in content marketing?

What is anchoring in marketing psychology (and should you use it)?

Reciprocity and the psychology of free

This website uses cookies to improve your experience while you navigate through the website. Out of these, the cookies that are categorized as necessary are stored on your browser as they are essential for the working of basic functionalities of the website. We also use third-party cookies that help us analyze and understand how you use this website. These cookies will be stored in your browser only with your consent. You also have the option to opt-out of these cookies. But opting out of some of these cookies may affect your browsing experience.
Necessary Always Enabled
Necessary cookies are absolutely essential for the website to function properly. These cookies ensure basic functionalities and security features of the website, anonymously.
Functional
Functional cookies help to perform certain functionalities like sharing the content of the website on social media platforms, collect feedbacks, and other third-party features.
Performance
Performance cookies are used to understand and analyze the key performance indexes of the website which helps in delivering a better user experience for the visitors.
Analytics
Analytical cookies are used to understand how visitors interact with the website. These cookies help provide information on metrics the number of visitors, bounce rate, traffic source, etc.
Advertisement
Advertisement cookies are used to provide visitors with relevant ads and marketing campaigns. These cookies track visitors across websites and collect information to provide customized ads.
Others
Other uncategorized cookies are those that are being analyzed and have not been classified into a category as yet.
SAVE & ACCEPT
Forum
Sign in / Join
Sign in